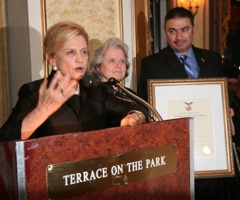 “Tonight we honored excellence in public service, philanthropy, and in one’s chosen profession,” said Supreme President Karacostas. “Our honorees inspire and serve as a fine example for all of us to emulate in our everyday lives. Their work on behalf of the community, and within society, is reflected in the worthy mission of the AHEPA family. The American Hellenic community can be proud of their fine accomplishments.”

The honorees for the evening included:

More than 300 persons attended this gala affair which was the first of four AHEPA National Regional Salute Banquets to be held in 2009 – 2010. Traditionally, AHEPA hosts a Biennial Salute Banquet in Washington, DC every two years. However this administrative year, the Supreme Lodge decided to embark on a new and fresh approach by taking this historically gala affair “on the road” to four geographically disperse communities. Future venues include: Portland, Ore., on March 6, 2010; and Chicago on April 24, 2010. A fourth venue will be finalized soon.