John Stamos Finally Gets His Star 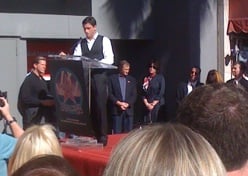 John Stamos has always been a star for his fans around the country, but now he officially became one as the 2,393rd star on the Hollywood Walk of Fame. The actor is best known for his role as “Uncle Jesse” on Full House. Stamos celebrates over 25 years in the entertainment business as an actor, musician and Broadway star. He is currently starring on Broadway as “Albert Peterson”, the role made famous by Dick Van Dyke, in Bye Bye Birdie. Stamos’ star is located right next to Dick Van Dyke’s star at 7021 Hollywood Boulevard.

Speakers at the star unveiling ceremony were Garry Marshall, producer of TV sitcoms like Happy Days and Laverne and Shirley; Bob Saget, Stamos’ co-star on Full House; and Jack Klugman, star of TV’s The Odd Couple.

John’s mother and sisters also attended the event as he dedicated the star to his father who died in 2001. Right after the event he wrote on his twitter page “my father said to me: a man has few great moments in his life-you have given me many- today is for you dad-and it even has your name on it!”.

Watch the Video from the event:
[youtube]_v8W4HW-2H0[/youtube]