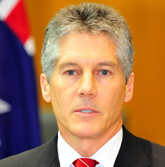 The Australian Foreign Affair minister Mr. Stephen Smith has reassured the Greek Australian community that the government’s position concerning the naming of FYROM remains unchanged.
The reassurance came in a recent letter Mr Smith sent to the Australian Hellenic Council (AHC).
The letter states that, “the Government provided advice to the Australian Hellenic Council in June this year that Australia’s position on the name issue remained unchanged. This advice stands.”
He further pointed out that Australia continues to use the UN provisional name as an interim measure pending the resolution of the name dispute between Athens and Skopje.
“Our approach to the social security agreement between Australia and the Former Yugoslav Republic of Macedonia is consistent with this longstanding policy.
We will conclude the agreement by exchange of letters, and Australia’s letter will use the UN provisional name.
This approach was also used to conclude the Stabilisation and Association Agreement between the European Union and the Former Yugoslav Republic of Macedonia,” Mr Smith replied to the AHC.
Patricia Drivas, the AHC National Coordinator, acknowledged the fact that this undertaking was given to the AHC during the June meetings in Canberra.
However given the overwhelming concerns of the Australian Hellenic Community a further clarification was necessary.
(source: neos kosmos)