And George Apostolakis, Commissioner to the Nuclear Regulatory Commission.
President Obama said, “As we take on the 21st century challenges facing our nation, I am confident that these individuals will work to keep our nation safe at home, and strengthen our partnerships abroad. I look forward to working with them in the months and years ahead.” 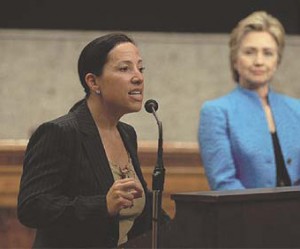 “Eleni Tsakopoulos-Kounalakis is a Northern California businesswoman, civic leader and philanthropist. As president of AKT Development Corporation, one of California’s largest land development firms, Mrs. Kounalakis has spearheaded major projects that are now home to thousands of families,” the White House said in a statement over the weekend.
Kounalakis served two terms as a California State World Trade Commissioner, where she engaged in the dynamics of the global economy.
“She travelled extensively as part of her cross-cultural work with the World Council of Religions for Peace, for which she engaged in the diplomacy of global interfaith dialogue.”
Kounalakis is a first generation American and an active member of the national Greek American community. She was the Pan-Arcadian Federation of America’s 2006 person of the year, and was recently awarded the medal of St. Paul, the Greek Orthodox Church of America’s highest honour.
Kounalakis is a trustee of Robert Redford’s Sundance Preserve and sits on Conservation Fund’s National Forum on Children and Nature. She earned an MBA from the University of California – Berkeley and her undergraduate degree from Dartmouth.
Kounalakis was a fundraiser for Hillary Rodham Clinton in her presidential campaign in 2008.
Angelo Tsakopoulos, father of Eleni Tsakopoulos-Kounalakis, donated over USD 3.2 million to Angelides’ campaigns beginning in 1993 and for the 2006 gubernatorial race, he donated USD 3.7 m to Angelides with his daughter, Eleni Tsakopoulous-Kounalakis donating USD 1.25 m.
Eleni Tsakopoulos-Kounalakis is married to Markos Kounalakis, President of The Washington Monthly magazine. The couple has two sons, Neo and Eon.

George Apostolakis, Nominee for Commissioner, Nuclear Regulatory Commission
Dr. George Apostolakis is the Korea Electric Power Company professor of Nuclear Science and Engineering and a professor of Engineering Systems at the Massachusetts Institute of Technology. He received his Ph.D. in engineering science and applied mathematics from the California Institute of Technology in 1973. He is a Fellow of the American Nuclear Society and of the Society for Risk Analysis. He received the Tommy Thompson Award for his contributions to improvement of reactor safety in 1999 and the Arthur Holly Compton Award in Education in 2005 from the American Nuclear Society. He was elected to the National Academy of Engineering in 2007. He is the Editor-in-Chief of the International Journal Reliability Engineering and System Safety and the founder of the International Conferences on Probabilistic Safety Assessment and Management (PSAM). Dr. Apostolakis is a member and former chairman of the statutory Advisory Committee on Reactor Safeguards of the US Nuclear Regulatory Commission. His current research interests include methods for risk and reliability assessment of complex technological systems; nuclear reactor safety; uncertainty analysis; the use of Probabilistic Risk Assessment (PRA) in design; infrastructure security; risk-informed and performance-based regulation; and risk management involving multiple stakeholders. He has published numerous papers and has participated in many PRA courses and PRA reviews.