More
GreekReporter.com Europe The Guardian: Will Driving Aphrodite drive Greeks up the wall?

The Guardian: Will Driving Aphrodite drive Greeks up the wall? 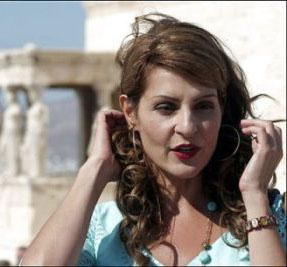 Country scarred by Shirley Valentine and Mamma Mia! braced for more movie tourism.
I have this fatal weakness for stories of exceedingly dangerous or arduous movie shoots. I’ve just enjoyed Conquest Of The Useless, Werner Herzog’s diaries from the Amazonian location of Fitzcarraldo (they’re exponentially more interesting than the movie itself), in which the director awakes every morning wondering what monstrous bug or murderous snake he will shake from his boot or trousers today, or whether the river has risen or fallen 30 feet overnight and beached or washed away all his boats. Last week I read what may be my favourite movie book of the year, Kevin Brownlow’s Winstanley: Warts And All, about the eight-year gestation of his only recently recognised 1975 masterpiece (for once the word is apposite) about the English civil war radicals, the Diggers. No vipers or tarantulas here, just years of rain-sodden weekends waiting around on a hill in Surrey for usable natural light, another 50 quid, or that one actor who absolutely needs to show up but won’t. Making movies – it must be misery, but Brownlow, a wonderfully genial narrator, makes it seem like a grand and gruelling adventure.
We already know a lot of these stories: Coppola in the Philippines on Apocalypse Now, becoming increasingly demented as his movie spirals out of control, he cheats on his wife, his star has a heart attack and every catastrophe the Furies can conjure is hurled down upon the crew. There’s the nightmare of Heaven’s Gate, as related by producer Steven Bach in Final Cut, or the ghastliness surrounding the death of Vic Morrow on the set of The Twilight Zone, and so on.
In these instances, it seems as though locations are literally at war with movie makers who foolishly dare to tread upon them. But just recently I’ve been pondering the reverse effect: how a movie can also declare a sort of time-delayed war-by-proxy on a perfectly innocent location, mainly by showcasing its beauty on film, and then a year later, after release, success and so on, by inundating that formerly tranquil place with wave upon wave of tourists.
Look at Greece, where Zorba-fication is now almost an ancient Hellenist art. Nobody goes there any more for the marvels of antiquity, or to see where Alexander fought or Aristotle thought; they go to see where Shirley Valentine copped her epic shag. They go to learn how Meryl Streep felt when she first heard Pierce Brosnan’s godawful singing in Mamma Mia! Where Nic Cage strummed dolefully in Captain Corelli’s Mandolin. And no doubt Nia Vardalos’s latest, the Greek road movie Driving Aphrodite, will do the same for whatever trail of towns and villages she passes through. Picture living in a country where your most serious immigration debate will soon be about how to rid your lands of an annual million matron march of squealing, drunken hen party coach tours.

Me? I always wanted to visit that Bond villain HQ island in Thailand from The Man With The Golden Gun. Not any more. I’m over it.
(source: The Guardian)