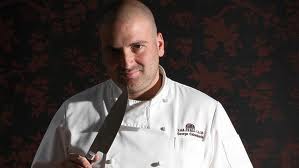 It’s not everyday that 15 top Melbourne restaurants and their chefs come together under one roof. But this was made possible at last week’s Taste of Melbourne Festival. The Royal Exhibition was transformed into a culinary extravaganza.
Turkish delight filled doughnuts, coffee cured ocean trout, and chocolate pave with burnt orange were only a small selection of the cornucopia of dishes available.
Fresh off the heels of MasterChef, George Calombaris made his distinct presence with an assortment of signature dishes from The Press Club, Maha, and the Hellenic Republic.
Spring Bay scallops with tarama from The Press Club, lamb souvlaki and saganaki with peppered figs from Hellenic Republic, and Lamb Kustilji and Turkish delight filled doughnuts from Maha were the featured dishes.
“The festival has been fantastic… look they’re all waiting for it,” he said, pointing to the crowd of people lining up for his dishes.
“It’s been neck-to-neck but the most popular would have to be the souvlaki and the lamb.”
Masterchef aside, Calombaris’ dishes seemed to impress even the toughest food critics. One year old Isabella, who is usually fussy with her food could not stop chowing down her wrap of souvlaki and chips.
“The meat is lovely- my one year old daughter won’t eat anything if it’s hard and she likes it,” said mother, Loretta Williams.
Also present at the festival were emerging Greek entrepreneurs, Paul and Christina Tantsis, who own Sisko Chocolate in Hawthorn. Their custom designed chocolate flowers, marble-like chocolate hearts, and creative sculptures were a standout amongst the many exhibitors.
The sweet yet tart natural Pama Pomegranate liquer, Dello Mano’s gluten free belgium chocolate brownies, and Movida’s Braised beef with Spanish paprika, saffron and potatoes need mentioning.
While I may never be able to prepare these dishes in my kitchen, Calombaris generously shares recipes from his upcoming cookbook due out in October.
“Nothing’s a secret in my new cookbook, not even the tarama from the Hellenic Republic. It is full of yummy simple Hellenic dishes that we all love,” he said.
Life has got even busier for the food guru, who is not only preparing for the second series of Masterchef, but is in the process of opening a new restaurant with business partner Shane Delia. Nestled in Cotham Road, Kew, Saint Katherine will have a focus on Cypriot and Middle Eastern cuisine.
‘It will have a beautiful wine bar downstairs and an upstairs restaurant that will be to Maha what the Hellenic Republic is to the Press Club,” he said.
source: neos kosmos