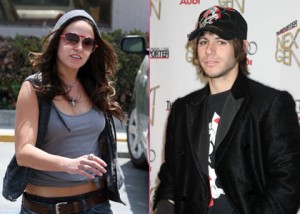 According to Eonline.com Paris Kasidokostas- also known in the US as Latsis which is his mother’s last name- is dating the beautiful girl from “Twilight”. The website reports that Paris, who had previously dated Paris Hilton, and Nikki, who had dated Robert Pattinson, are serious and have introduced each other to their families.

“They met about six months ago and have been together since. The reason she traveled over to Greece was to be with [Paris],” spills a supertight bud to Nik at Eonline.com.

“Both families have met, and really like each other. That’s how serious it’s getting between [Nikki and Paris],” ‘fesses a good friend of the couple. “Robert Pattinson is nowhere on the radar. She’s upgraded, in her mind.”

She’s going to be rubbing elbows with some of the richest and most powerful people in the world and maybe star a new film that Paris will produce. Lately the 29-year old Greek through his company 1821 Pictures, has funded projects such as “Swing Vote” with Kevin Costner, and “The Box” with Cameron Diaz.

China Lands on Mars: Tianwen-1 Rover on the Red Planet