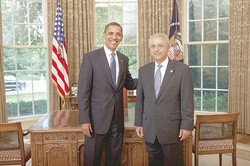 Ambassador of the Hellenic Republic Vassilis Kaskarelis presented yesterday (July 20, 2009) his credentials to the President of the United States Barack Obama.

In his remarks, Ambassador Kaskarelis stressed that the two countries have often found themselves fighting shoulder-to-shoulder and waging concerted efforts for the common cause. “Shared values and principles”, he remarked, “as well as plain geo-strategic realities, have provided the thread consistently running through the long-standing bonds between our two countries and peoples”, ties that acquire their full magnitude only if seen “as the building-block of our future cooperation”

Mr. Kaskarelis expressed his conviction that there exists ample room for further cementing “our friendship and our strategic partnership”, outlining areas of common effort like global terrorism, cooperation between US and the European Union, a rational transformation of NATO, the Western Balkans, the Middle East and the Eastern Mediterranean, problems of illegal immigration and energy security, “going to the root of the issues and not scraping the surface”.

In all these matters, Ambassador Kaskarelis said, “Greece is already making a significant contribution, using to good account her strategic location and unique status as a NATO and EU member in one of the most sensitive regions of the world”.

Ambassador Kaskarelis also welcomed U.S. strong support of efforts aiming at a fair, viable and working solution in Cyprus, in conformity with UN Security Council resolutions and the European Union acquis, and pointed out that the US support efforts to reach a mutually acceptable solution to the problem of the FYROM.

Furthermore, Mr. Kaskarelis expressed his hope that holders of Greek passports will soon be free to visit the U.S. without needing an entry visa, bringing the two peoples even closer together.

Finally, the Ambassador emphasized that more progress can be achieved in bilateral relations in the economic, trade, cultural and other fields, and paid tribute to the Greek-American community. “In all our endeavors”, he remarked, “we are blessed to be able to count on yet another solid bridge of friendship: the prosperous and enterprising Greek-American community, whose members embody, better than anyone else, the steady foundations of our relationship”.

On his part President Barack Obama extended a warm welcome to the Ambassador and his family and said he was looking forward “to working closely with you to deepen the already close relations between our countries”.

The President laid particular emphasis on Greece’s Chairmanship of the OSCE, remarking that “As a fellow member of the OSCE, we are grateful for Greece’s able leadership as OSCE 2009 Chairman-in Office”.

Concluding, the President noted: “Our relationship is strong, and I look forward to our continued collaboration in the great international efforts of our time — to protect democracy and freedom, to deal with the global economic crisis, and to confront terrorism. I look forward to working with you Mr. Ambassador, to advance our common agenda and deepen the strong and abiding friendship of our countries. It is a pleasure to welcome you to Washington”.