TechNews
GreekReporter.com Hollywood What it Takes 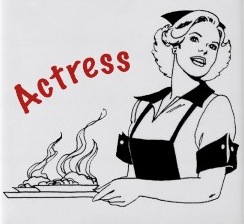 Years ago I saw an interview with an actress who made a big impression on me. It wasn’t that she had anything particularly special about her that struck me but simply that unlike many others in our profession she was a real live working actress. ‘Working actress’ referring of course to someone who actually earns their living acting instead of as a waitress.

For most people that may seem like a difficult thing to relate to. That’s probably because most people go to school, study hard, finish school and go on to work in their chosen field. After a few years of working hard maybe they can even afford to do something crazy like buy a car, take a vacation, or go to the dentist (unless you live in England).

Our reality unfortunately, is a wee bit grimmer. In our profession we can study for years, for our entire lives even, we can be talented, ambitious, beautiful, hard working, utterly devoted to our craft, and still never make a living at it. Just take a quick peek at history if you want the cold hard truth. William Blake lived most of his life in poverty, Chopin’s (no, not the vodka) financial success never came close to matching his genius, Frida Kahlo wasn’t properly recognized until years after her death. Never mind the thousands of talented actors and actresses that have worked their tails off in television, community theater, independent film, off-Broadway, off-off-Broadway, even performing in city streets and parks, never to make a decent living – led alone have a 401k plan or health insurance.

I’ve thought about this a lot over the last few years. Especially as I exited my early twenties when having five roommates and eating beans could still be looked at as ‘romantic’. Back then, we were fighting the good fight – doing what we believed in and loved and were willing to suffer for it. The older I got however, the more I had to admit that suffering became less and less appealing. Slowly, friends from my generation of Toronto actors started leaving the profession in droves, realizing that they would probably never be able to afford a house, a family, or even a cat. But that didn’t stop me, no sir. It wasn’t until Sex and the City came on the scene and with it Jimmy Choo’s and the Grace Kelly handbag that I realized not even I was immune. Forget the house in the hills and the children – I wanted a pair of Manolo Blahniks, damn it!

In fact, the more I think about it the crazier it makes me. Really. It makes me mad. As performers we contribute enormously to the world. We are reflections of societal values and issues, we encourage thought and provoke discussion, and we provide entertainment and escape from the difficulties of everyday life. Yet half of us can’t even afford to treat ourselves to a cup of java twice a week. It’s simply not fair. Yes, I know what you’re going to say – life’s not fair. That doesn’t comfort me though. I can’t help but think of poor van Gogh. Perhaps I finally understand his absinthe and missing ear incident. Poor thing probably couldn’t afford to buy a bottle of whiskey and look what happened.

Yes, but not me you say. I’m different… Uh huh, says I back.

That same actress I watched in the interview was asked one final question.

“What advice would you give to a person who wants to pursue an acting career?”

Without hesitation she offered this little jewel of advice. “If there is absolutely anything else that you think you could do and would make you happy, do yourself a favor and do it.”

Translation: You have to be insane to want to be an actor. That goes for wherever you are – Hollywood or Halandri.

Since that interview I have heard that same piece of advice from countless other artists. The only thing that really gives me any peace of mind these days is that acting has an eerily Darwinian course. You can expect most of those stragglers and wannabe’s (imposters – as I like to refer to them) to be sifted out once they’re given a good, hard dose of reality. The only problem being of course, that each one of them will immediately be replaced by another deliriously misguided soul who believes wholeheartedly that they’re the new Nicole Kidman.

But what about those of us who are in it for better or worse? What are we to expect and look forward to? I don’t want to believe that I’m at the mercy of every casting director and producer in Hollywood. Besides, some of them are so irritating I feel it’s my duty to succeed out of spite. I want to have some control over my own destiny as much as you do. So we’re going to spend the next couple of weeks trying to find out how to do just that – and pay the bills doing what we love.

Drop in on me next week where we’ll pick up where we left off on this two-part column, What It Takes.