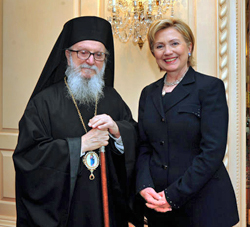 WASHINGTON, D.C. – The U.S. Secretary of State Hillary Clinton met at the State Department with His Eminence Archbishop Demetrios and National Coordinated Effort of Hellenes (CEH) Cyprus Conference leaders. Secretary Clinton was presented with an award for unprecedented steps taken in the right direction on Hellenic and Orthodox issues as part of the 25th Annual Cyprus and Hellenic Leadership Conference.

The event followed CEH’s meetings yesterday with 34 key Members of the U.S. House of Representatives, 10 key U.S. Senators and numerous key Administration officials from the White House and State Department.

Secretary Clinton was presented with an award that contains soil from the location in Athens, Greece where democracy was born and from the United States Capitol Building, the seat of the world’s greatest modern democracy. The text above the soil reads, “From this hallowed earth have come the world’s greatest minds, ideas and actions.”

Secretary Clinton has played an important role in beginning to slowly turn the huge ‘American ship of state’ in a just direction on issues regarding Hellenism and Orthodoxy, but it still has a long way to go to make up for the damage of recent years. In an unprecedented step, Secretary Clinton, as well as President Barack Obama, mentioned in major public remarks in Turkey the subject of religious freedom and the need to reopen the Halki Patriarchal seminary.

As well, on Cyprus, Secretary Clinton overturned her Department’s attempt to bring de facto recognition to the occupied area of Cyprus by having her meet with Turkish-Cypriot leader Mehmet Talat prior to meeting with the leadership of the Republic of Cyprus. And she has held two bilateral meetings with the Foreign Minister of the Republic of Cyprus in just her first three months in office. (In addition, President Obama, while addressing the Turkish parliament, called for a just and lasting settlement of Cyprus into a bi-zonal and bi-communal federation, contradicting public positions taken by Turkish leaders. This was the first time a U.S. President has done so in many years.)

Secretary Clinton also aligned the U.S. position on the FYROM issue with Greece’s at the recent EU-US Ministerial meeting in Prague. She said FYROM must resolve the name issue before joining NATO. (In addition, President Obama selected only Greece from among all European countries with which he had a bi-lateral meeting on his recent trip to Europe).

CEH leaders included in their conference heads of several other major Greek-American organizations, in addition to AHEPA, including: AHI Executive Director Nick Larigakis; SAE Coordinator of for the U.S. Ted Spyropoulos; Pan-Macedonian Association President Nina Gatzoulis, among others.