Ex-Detective Makes New Strides In Boxing As Well As Hollywood 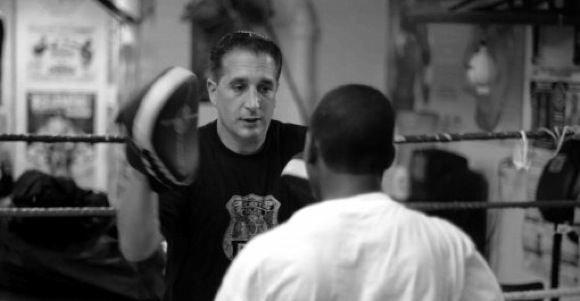 As you enter the Park Hill PAL Gym you can sense the energy and the commitment in the air. At times you can catch the lean and determined ex-detective/boxer Thomas Dades in the center ring. Thomas Dades is only a volunteer at the gym put a staple in the community. He has made major strides on “the street” as well as in the ring.

Thomas a son of Greek-Italian parents grew up around the rough and tough streets of Brooklyn and learned quickly the importance of loyalty. He decided at an early age of which road to follow. The two roads available were either the straight and narrow or the road of crooked promises. He would go on and become a decorated officer for the New York Police Force. Thomas became a household name for local gangsters who he pursued.

Thomas has been involved with the force for at least twenty three years. He landed his spot in law enforcement after taking one of many civil service tests. “I took a few and the police department’s test came through first and I jumped at it.”

He served in the narcotics division where he did everything from buying drugs on high and low levels to various other felonies. “Being an undercover cop for those three years was exciting.”

His good work earned him his promotion to detective around 1986-1987. After he was promoted to 3rd grade detective he was assigned to a detective squad. That squad the 6-8 covered areas like Bay Ridge and Dyker Heights. He was stationed there for eight years. He soon was promoted to 2nd grade when he was there. They focused on everything from harassment to homicide but there main goal was organized crime. Thomas also had the pleasure of coming in contact with another decorated detective Joseph Pistone. “What Joe did was amazing. He gave many years of his life to do the job he did.”

Joseph Pistone became an undercover cop back in the 80’s where he infiltrated the Bonanno crime Family. His testimony landed many wiseguys in jail. Joseph sacrificed a lot to accomplish what others feared to do.

Thomas who worked on the Eppolito- Caracappa case did find some individuals who disliked his concerted effort with the case. He explained how some people would have liked it better if he closed an eye to it. But he actually developed great satisfaction in being apart and seeing the case through. On December 5th, 2008 both of the so called “mafia cops” were sentenced.

The mafia as we know it and have come to know it is no where what it use to be. It is evident coming from Thomas’ experience and knowledge. “It will never really go away but it will never be what it once was. There were reasons that guys went that way. Sometimes life did not offer anything better, today, the kind of candidates are not the same quality.”

Presently, Thomas has been busy working out the kinks of a new book documenting the case of Louis Eppolito and Steven Caracappa. The book which is entitled “Friends of the Family” is due out next year. Besides the novel a film detailing the story is in pre-production. It is being produced by the company “29/29” and directed by John Hillcoat.
The film will chronicle the events leading up to the conviction of the so called “mafia cops”. Thomas was a driving force in the case and spearheaded the investigation. The film is due some time in 2009-2010. The book which is being released by Harper Collins was penned by well renowned author David Fisher.

Besides working diligently on both projects Thomas is also a supporter and leader in the world of boxing. His grandfather was a huge fan of boxing as well as being one and he inspired Thomas to be involved. At six years old Thomas began to show interest. His grandfather’s boxing name was “Blackie”. He fought on the Lower East side of Manhattan on Cherry Street.

Thomas would go on to box on an amateur level. He had a total of 60 bouts. “I had about sixty fights, from smokers to tough man contests to Police Team fights.”

During his time in boxing he has come across many notable boxers like: Gary Stark Jr, Nicky DeMarco, Junior “Poison” Jones, Anthony Camarano, Terrence Meyers and Nwatchi. He ran the Park Hill for five years with Gary Stark Jr. he currently is involved with the DeMarco Boxing Gym. Besides being aligned with Gary Stark Jr. he is presently working with another supporter of boxing Pat Russo.

Since being apart of the DeMarco Boxing gym he has offered his guidance to aspiring boxers. At the 2009 Golden Gloves he will be there to support and aide others yet due to certain injuries inflicted from boxing he is limited in what he can do.

His son Frankie is also involved in boxing as he followed in his father’s footsteps. “My son has been involved for about two years and is doing well. Is a great way for father and son to bond.”

Thomas also admits that coming from a dual ethnic background has helped his way of thinking. “Being raised around both cultures is valuable. It shapes you in many ways be it Greek or Italian.”

Thomas’ main goal in boxing is to help younger kids focus on their commitment to the sport. “It centers on dedication, sportsmanship, education and confidence. It comes with the sport. A strong mind only delivers a strong body.”

Even though Thomas did not receive many accolades from his fellow officers he did receive glowing words from former champ. Peter Spanakos. “He is a strong willed person and an example of commitment and loyalty to his work and to the sport.”

In time Thomas will not only be spoken of at boxing gyms and Police stations but also in what has been coined “tinsel town”, Hollywood that is.