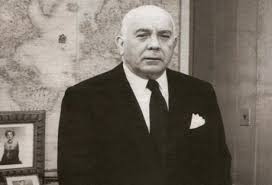 We’ve all heard of the family of movie moguls, Warner Brothers, but how about the Skouras brothers? Charles (photo left), George and Spyros Skouras all rose from an impoverished background to become top movie executives in Hollywood during the 20th century.

The Skouras brothers emigrated from Greece to St. Louis in the early 1900s. They were the sons of a poor sheep herder from Skourohorion, Greece. They saved their money working as busboys and bartenders in downtown hotels, so that by 1914, they were able to invest in a nickelodeon theater in St. Louis. This initial property was named the Olympia and was quickly followed by the acquisition of other theaters. They owned 30 local theaters by 1924. 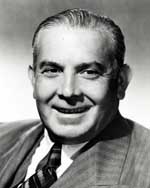 Five years later, they sold out to Warner Brothers and moved to the west coast. Between 1930 and 1932, Spyros(photo right) worked with Paramount, but left to save the Fox Metropolitan chain from its demise. In 1932, the Skouras Brothers took over the management of over 500 Fox-West Coast theaters.

During the 1930s, Spyros played a significant role in the merger between Fox and 20th Century Pictures. He was appointed president of the new company 20th Century Fox in 1942, and with the assistance of Darryl Zanuck, turned it into one of Hollywood’s most powerful studios. He would serve as president for the next 20 years.

During Spyros’ tenure, he worked to rescue the faltering movie industry from television– its new competitor. 20th Century Fox’s famous advertising slogan, “Movies are Better than Ever”, gained credibility in 1953 when Spyros introduced CinemaScope in the studio’s groundbreaking feature film The Robe. The CinemaScope process of wide-screen projection started a new, yet short-lived trend in colorful epic films.

Charles Skouras went on to become president of National Theaters which at the time owned 650 theaters across the nation. Giving back to the Greek community, Charles built the Saint Sophia Cathedral in Los Angeles which opened in 1952, a beautiful Greek church that still stands to this day. He died two years later at the age of 65.

During World War II, Spyros was head of the Greek War Relief Agency. Spyros was known throughout Hollywood to have a thick, Greek accent. Bob Hope said: “Spyros has been here twenty years but he still sounds as if he’s coming next week.”

During his reign as president of 20th Century Fox, Spyros oversaw the production of many successful movies. However, his tenure ended in 1962 after the disastrous overspending on the budget of Cleopatra, the epic starring Rex Harrison, Elizabeth Taylor, and Richard Burton. The film was originally budgeted for $2 million, but was made at a cost of $44 million. Widely regarded as one of the biggest flops of all time, the film’s box office failure almost bankrupted 20th Century Fox, and Skouras was blamed for the fiasco. He was replaced by Daryl Zanuck .

As a result, Spyros was re-assigned to the position of board chairman and his control over films was largely taken away. In 1969, he left 20th Century Fox to nurture his other investments which included his own shipping line. He died in 1971 at the age of 78.

Ironically, Cleopatra recouped its investment after several years from box office receipts and television sales. Yet it still remains the most expensive film ever made (adjusting for inflation).

Plato Skouras, son of Spyros and Sara, followed in his father’s footsteps in the movie industry. He formed his own independent film company and produced several independent films. He died in 2004. At the time of his death, he was working on a biography of his father.