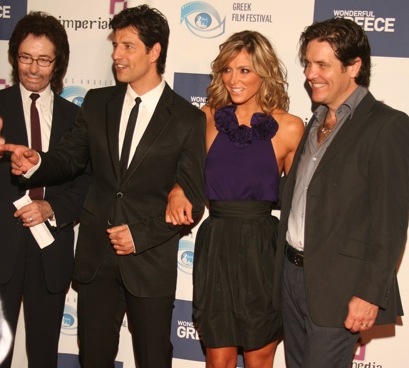 After five days, with an opening night gala at the Egyptian
Theatre featuring a fully restored version of Zorba the Greek, the 2nd
Annual LA Greek Film Festival came to a resounding and successful
close last night with a gala at the Pacific Design Center in West
Hollywood.

Attending the event last night was a who’s who of prominent
Greek-Americans most notably music superstar Sakis Rouvas. Frequent
television host and journalist Debbie Matentopolous introduced the
film, beginning with comments questioning why the very people who
invented show business, “Ever heard of Aeschylus, Sophocles, Homer–not
the one from the Simpons,” had to wait so long for a film festival in
the heart of the entertainment capital, “I mean, two thousand years
and this is only the second one?,” she added.

She went on to introduce the two people who made the film festival
possible in the first place, Program directors Ersi Danou and Angeliki
Giannakopoulos, as well as Dimitris Caramitsos-Tziras, Consul General
of Greece in Los Angeles, and Sid Ganis, President of the Academy of
Motion Pictures of Arts and Sciences among others. Other stars in
attendance included My Big Fat Greek Weddings’ Michael Constantine.

Featuring the film Little Greek Godfather, directed by Olga Malea and
based on a screenplay by Malea and Nicholas Papandreou, the crowd was
treated to one of the best films to come out of Greece in recent memory.
Based on the autobiographical short story by Nicholas Papendreou, son
of former Prime Minister Andreas Papandreou, Little Greek Godfather,
tells the story of young Alex, the son of a prominent Greek politician
who in the summer of 1963 is sent in lieu of his father to Crete to
baptize the daughter of a local Democratic party official and deliver
the speech his father was to give while his father heads to Paros to
stem party opposition. A funny, sentimental and moving film, Little
Greek Godfather was greeted with much praise by the audience and led
into the Orpheus Awards Ceremony which bestowed the best film award to
“Eduart” and the best documentary film award to “Resurface”.