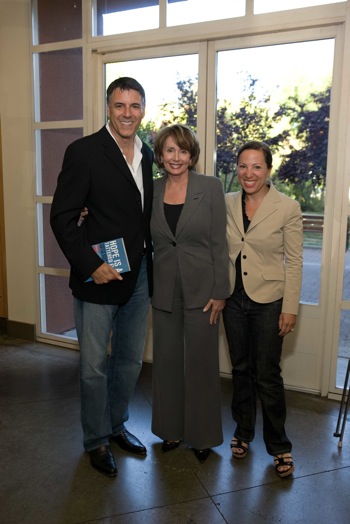 “Hope Is a Tattered Flag” is the title of the new book of Markos Kounalakis and co-author Peter Laufer.The book which has been described as “Voices of Reason and Change for the Post-Bush Era” and “Clear prescriptions for post-Bush America by America’s best political minds—left, right, and center” will be available in the bookstores on July.
In the Press Release the editor states: “Whether it’s New Mexico’s Governor Bill Richardson connecting the dots between baseball and Hugo Chavez, Huffington Post founder Arianna Huffington’s riffing on facelifts and fearlessness, or JFK speechwriter and adviser Theodore Sorenson’s timeless wisdom for wonks, the work collected in Hope Is a Tattered Flag represents a major paradigm shift for politics in America. This is the bellwether entry in 2008’s crowded field of political titles. Here are the most listened-to politicos and pundits, activists and thinkers, along with a few fascinating Americans you will encounter nowhere else, weighing in on what we as a nation need to do after George W. Bush leaves behind the Oval Office and his legacy of bad decisions and squandered opportunities. How do you fix what the Bush administration broke and seize this unique opportunity for growth and prosperity? Here finally are some answers. The dozens of contributors include environmentalist Carl Pope, former presidential hopeful Pat Buchanan, and populist Bill McKibben.

Markos Kounalakis and Peter Laufer are co-hosts of the nationally syndicated radio show “ Washington Monthly on the Radio” (broadcast on XM and Air America affiliates in several major markets). They also write a regular feature in Washington Monthly magazine, a leader in political thought and social commentary since 1969. Previous books include Beyond Spin by Kounalakis and Mission Rejected by Laufer.

Greece announced another 2,801 new COVID-19 infections on Saturday, while 781 patients remained intubated due to the pandemic.
Diaspora

Capital Link sponsored a webinar on Tuesday highlighting the importance of Greek culture and education amongst the Greek-American diaspora.