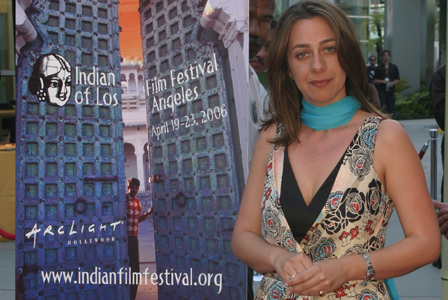 You can find Greeks in the most awkward positions under very uncommon circumstances all around Hollywood, but to discover that the president of the Indian Film Festival is one of them is really a surprise. The brains behind the event is Christina Marouda (left), a girl that was born and grew up in the Greek island of Crete. Then she came to Los Angeles and …yes she created the Indian Film Festival. The event became a success for Hollywood and Bollywood and attracted many sponsors. Marouda responds to the people who ask her how a Greek started an indian festival saying “ When I was a little girl in Crete, my sister’s friends from India would send us tapes of their favorite films…we would invite all our friends for a half-day celebration of drama, dance, songs…I loved it and it grew in me deeply.” This year the festival featured many great Indian films from April 22-27 at ArcLight Hollywood, located in the heart of Los Angeles. Jury and Audience Choice Prizes were awarded for Best Feature, Documentary and Short film. For more info visit: indianfilmfestival.org