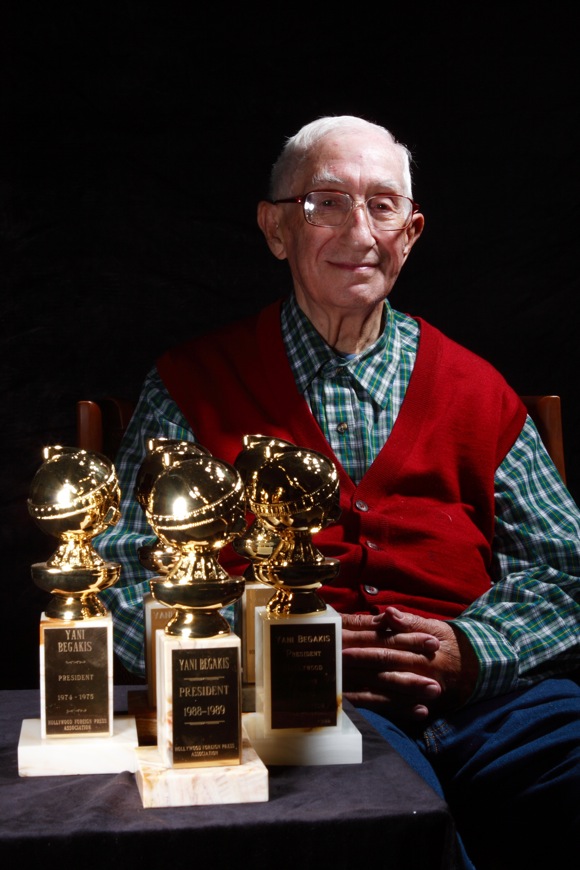 Photos by Alex Vacca
*Translated in English by Maria Stenos.

*The interview was published before Yanni’s death.

The story of the Golden Globe Awards could also be named…Yannis Begakis. A true native, even in mannerisms, of the Greeks of Istanbul is one of the oldest members of the Hollywood Foreign Press Association (HFPA), the association which organizes the Golden Globes. He is the man who helps various Greek directors both gain contacts in Hollywood, and access to the well known event, the Golden Globe Awards. At the age of eight, orphaned by his father’s death, Yianni began to work in the theater’s buffets of the city in order to help his family financially. Today he lives in West Hollywood, one of the most well-off areas of Los Angeles. We met him at the Ballroom in the Beverly Hilton, the place where the Golden Globes took place, and after two interruptions (due to phone calls from Greek directors who wanted the coveted invitations for the star-filled night) he finally managed to speak to us about his adventurous life, the one that – as he himself says – will at some point become a book.

Even when I was in school, I worked. The theater was my passion, I worked and then I would go to school. In my life, I have seen a numberless amount of movies, not only American, but also French, German, and Turkish. Also, I learned English through the movies. Seeing American movies and having bought a learning program, I managed to both write and speak English without taking even one lesson.”

In 1946 he went into the army for 26 months, and upon his return, he worked for a travel agency.

“At the agency, they would give us free trips as a bonus. At that time, I came twice as a tourist to visit Los Angeles. I also worked in the office of the newly-built Hilton in Istanbul, and there I gained from different personages that I met, I even established a good connection with one Greek-American, Mr. Skoufa, who in those days was the president of the said company which maintained many (I am not sure how to say ’10s’, we don’t really say that in English) Century Fox.”
After the September Massacres, Istanbul could not keep Yannis Begakis. He decided to go far away from the then destroyed city. His destination was back to Los Angeles. This time, he did not go as a tourist, but with intention of establishing himself. I remember that when I arrived I had 600 dollars in my pocket, which was not a small amount during that time, and I went and met Mr. Skoufa, who I had met when I worked at the Hilton, and I asked him to help me to get a worker’s permit because I had come with a Visa. He immediately sent me to a friend of his, a member of Kogkresou (? I am unsure what this is), who helped me and eventually I got my permit for residence and employment.

He immediately sent me to a friend of his, a member of Congress, who helped me and eventually I got my permit for residence and employment. Also, the then president of Fox gave me a special pass so that I could go to the movies and pay only 25 cents. That pass saved me financially, because without seeing movies, I could not live. I also rented a house and in the beginning, since I made a good living, but aside from all that I did not miss one film.
In those days, he began correspondence with the Greek newspaper Embros of Istanbul. In a short time the correspondence turned into a business venture. In 1959 since I was working with the newspaper Embros I became a member of HFPA. Because of that I sent a letter to my sister so that I could invite her to establish herself within the US . She came and worked for the same newspaper that I worked for, and she also became a member of the organization, since it was easy back then.

Today, in order to become a member of HFPA you need to have the typical requirements, but you also need to have connections – since you need to know at least 3 members of the organization in order for your application to be considered for acceptance. Every year the regulations of Hollywood’s association allow the acceptance of only 5 members. For the Golden Globes, all the members (they do not exceed 100) have one vote. Other than that, being a member of this association can help you make connections that will change your life. A living example of that is Mr. Begakis.